It seems just like yesterday that I held Lil Sid in my arms for the first time. And now in a couple weeks my bundle of joy will turn three! How time flies! At one moment he is this fragile, helpless puny little kid, hanging mid air from Monkey-bars, shrieking "Mommieeeeeeeeee.......", and at the next moment, he carries his dinner plate to the sink, saying "Let me help. I am big boy!" He is a fiercely independent kid, who wants to do everything "all by myself". This pleases me and worries me, all at the same time. Pleases me, because my kid is gearing up to face the world and worries me, because in few years, may be he won't need me. That's a fear, I guess all Moms lives with. Now that I am a mother myself, I realize that no matter how independent you become, you will always need your Mom! Needless to say, the journey so far into motherhood has been very fulfilling, enriching and rewarding.

Since Little Sid's Birthday falls in the last week of May, I have decided to blog about Sid's favorite foods all month long, starting with his fav breakfast - his Yummy Choco Milk and Fluffy Micky Mouse Pancakes. 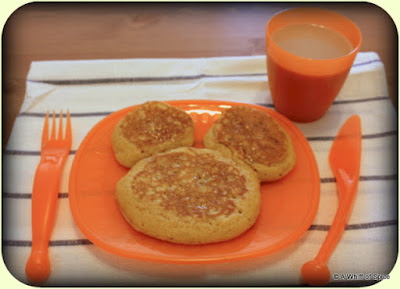 I am one of those lucky moms who does not have to fret too much to make her kid drink milk. On the contrary, I had to ration his milk intake, as every time he was thirsty, he would want milk instead of water. Though milk is extremely good for growing kids, anything in excess is not good. So I have limited his milk intake to two cups a day; one with his breakfast and one as the afternoon snack. Sid prefers his milk cold and without sugar. Weird! But true!

For breakfast, Sid usually has milk plain, straight out of the fridge (I microwave his milk for 20 sec, so that the chill is gone... but dont tell him!), mostly with his bowl of cereals. But in  the afternoon, he has have his Choco Milk, with is simply chocolate flavored health drink mixed with his regular milk and jazzed up with little instant coffee and vanilla. The teenny bit of coffee makes the milk more chocolaty and the vanilla provides the depth. This chocolate milk is heavenly both as a warm and cool drink. And its not only Sid's favourite but his Daddy's as well!

Pancakes are Sid's new found love, thanks to his Shaaii Mashi. Since I am a diabetic, I generally avoid sweet breakfasts. On a average weekday, our breakfasts are generally oatmeal, whole wheat toasts and egg-white omelets. Sid's staples is milk and his Fut Luts (Kellogg's Fruit Loops). Sid's Shaaii Mashi had treated us to an amazingly fluffy and soft pancakes one Sunday morning, when we impulsively landed at their house the night before and ousted them from their own bedroom. It was she, who first made the Micky Mouse shaped Pancakes that Sid is so crazy about. A few days later, Sid insisted for pancakes and I made a frantic call to Shaaii Mashi only to learn that she used Aunt Jemima's Pancake Mix! Since I did not have the Aunt at my disposal, my trusted and never failed Google Search came to rescue. A few click here and there landed me to a perfect 'from scratch' recipe. As usual I tweaked a bit, but the resultant pancakes can definitely give Aunt Jemima a stiff competition. As of now, I know that I am not going to use a box mix for pancakes for a long long time.