Chicken Stew for Sid as made by his Maam

Mother's Day just went by and for a whole week I contemplated what to post as my Mother's Day Recipe. Should it be Ma's favorite recipe? Or should it be my favorite Ma's recipe? After a lot of contemplation, I decided to go with Sid's Chicken Stew as made by his Maam.

Sid calls my mother Maam (pronounced as Maa-aam) and considers her to be the best cook in the world. So do I. He is very fond of her and misses her terribly in this foreign land. And he loves her Chicken Stew. Every time I make a stew at home, with variation, he'll ask "Maam er stew?" (stew made by Maam). I'll reply "Naa, Mummy r stew." (stew made by Mummy). He'll say "Khabo naa. Maam er stew khabo." (I wont have the stew made by you. I'll have stew made by Maam) 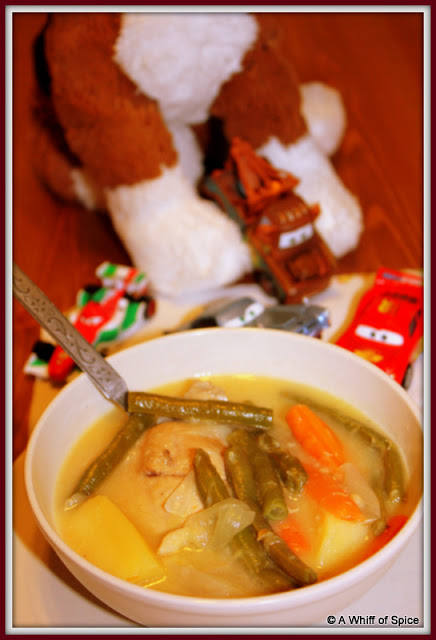 This is the stew Ma used to make for him after he turned one. Initially, she used only potatoes and green papaya and used to make it in a pressure cooker. As Sid grew, more complex vegetables were introduced in the stew. This stew happens to be a family favorite in my home. Every time my sister comes home from hostel, Ma has to make this stew at least once a week. We have had this stew with roti, rice and just by itself. But I enjoy it most with crispy toasted bread. I made this stew for Sid's second birthday and he loved it.


You can add any conceivable vegetable in a stew. I have added turnips, parsnips, zucchini, summer squash, snow peas, cauliflower and broccoli in various combinations in my stew. But Ma always made her stew with carrots, green beans, potato and green papaya. The vegetables were cut in big cube (Dumo dumo kore kata! ) and she used whole onions. I used baby carrots halved, green beans and potatoes. I missed the papaya, because I forgot to buy it during my weekly grocery. I chopped my onions into big cubes. 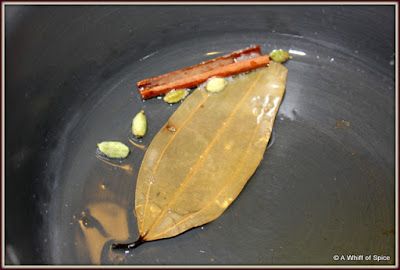 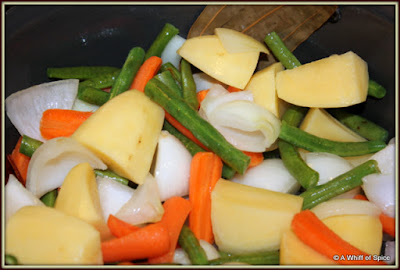 Next I add the onions and the vegetables and fry for a minute. 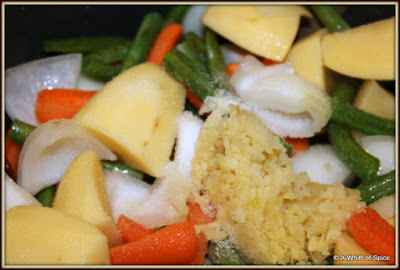 Now I add the ginger-garlic paste and fry for another minute or so. 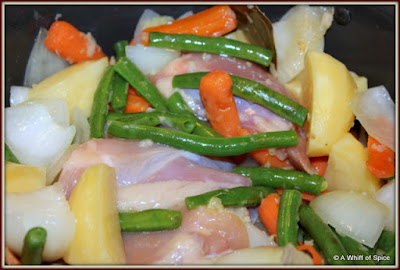 The chicken pieces goes in next. I stirred to coat the chicken with the masala. Add salt. (You can add half a teaspoon of sugar at this point; Ma does, I don't.) Reduced the heat to Medium-Low or Sim and cook covered for 15 minutes. I do not add water at this point, since the veggies and the chicken will release their water and will get cooked in it. 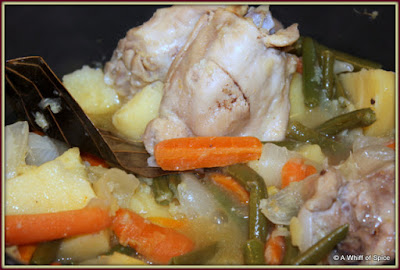 15 minutes later, the chicken is all cooked through and the veggies are tender and flavorful. If you feel you need a little more liquid, go ahead and add a cup of water and let it come to a gentle boil. 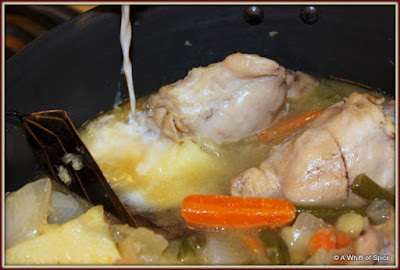 I thicken my stew with atta-milk paste [use Atta (whole wheat flour) and not Maida (all purpose flour)]. I mix 1 tbsp of atta with 1/4 cup of milk into a homogeneous paste, without any lumps and add it at the fag end of the cooking time. Then I let the stew come to a boil, so that the atta taste is gone and the stew has thickened little. You can use cornflour as a thickening agent. But I feel the texture, using atta-milk mixture is a lot better. Or may be, because Ma does it this way! 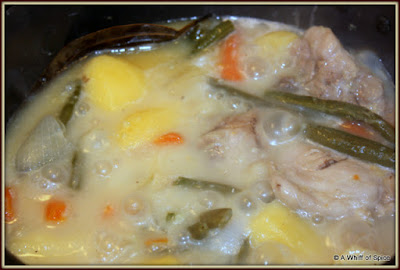 The stew is ready to be served. Finishing touches are added in form of a dollop of butter and a fat pinch of Garam Masala. This step is absolutely optional though.