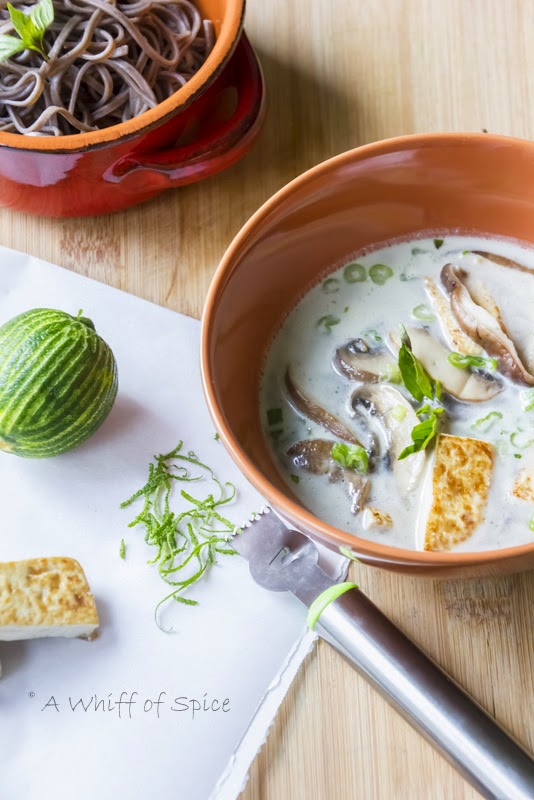 Before this post embarks on any controversy, let me give the following disclaimer:

I  make no such claim that this soup is authentic Thai. It does contain Coconut Milk but no curry paste. Sid had one sip of it and said it tastes a lot like the soup we get in Sukhothai, our most loved Thai restaurant in Cincinnati. Since then, I call it Thai Style Tofu and Mushroom Soup!

This gorgeous soup came together as a result of a fridge raid operation. My fridge looks pretty desolate on Fridays. Putting together a decent lunch is a challenge. Scrambled Egg Quesadilla is pretty much our go-to lunch situation on most Fridays.  But not today, as I am out on cheese and really low on eggs.


Now, if you want to put food in front of Sid, that he wont sniff, give dubious look and ask you a zillion question, Tofu is the way to go. The lad doesn't seem to get enough of it. Pair it with his another favorite, also known as Mushrooms, and you suddenly become the best Mommy in the world! 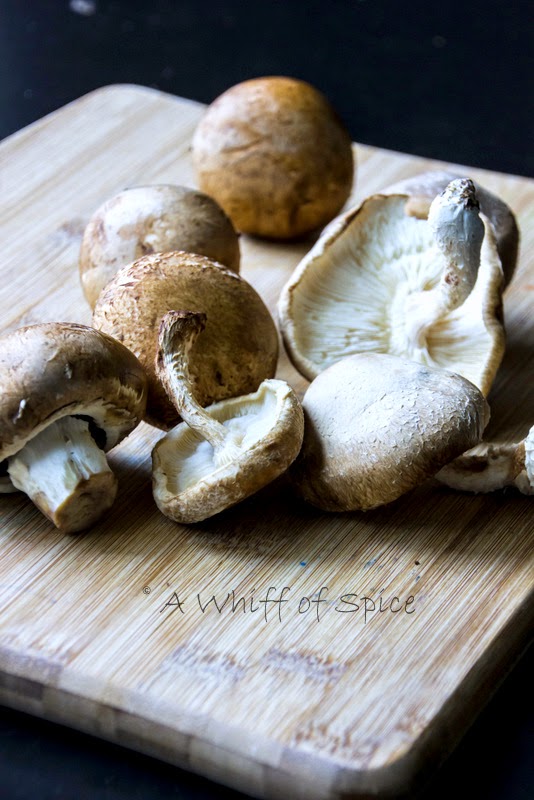 Sid has forever loved Mushrooms. Recently, he came to know, that mushroom is not really a vegetable, but actually a fungus, a special type of living organism that has no roots, leaves, flowers or seeds. The news did not bother him much. Only, now he refers to mushrooms as "Fungus". He digs his fork in a mushroom and says "Ahh Fungus! I love eating you", before chowing it down. And that, kind of creeps me out.

I have used Shiitake and Crimini Mushrooms, because it was all I had. I actually wanted to use just Shiitake, but did not have enough, so I added the Crimini ones just to bulk up. But using two different kind of mushrooms really brought a nice flavor and texture to this soup.

I love Shiitake mushrooms. They is so intensely rich, smoky and meaty. However, while researching for this post, I came to know about its amazing health benefits too. Read the "Diabetic Platter" section to know more about it. 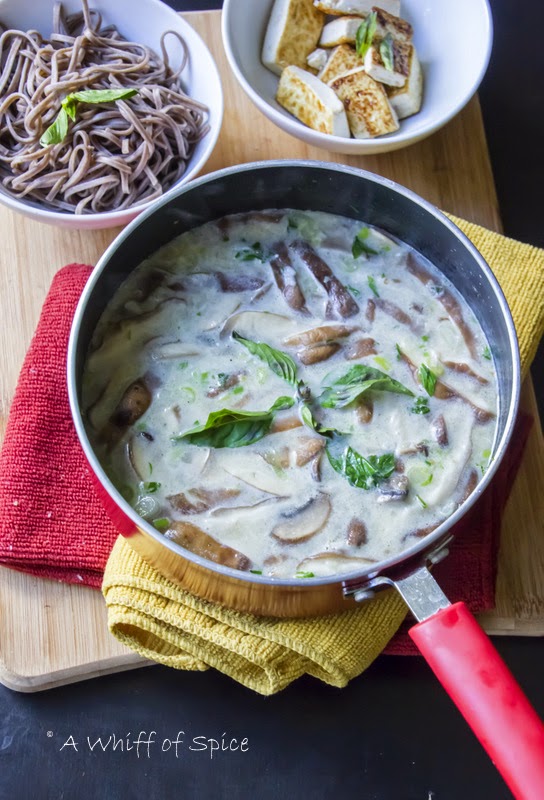 Kaffir lime leaves is another aromatic, I love using. The lime-n-lemony aroma takes a simple curry to a whole new level. Since, the soup was a "fridge-raid" operation and not a planned recipe, I did not have any kaffir lime leaves. The zest of  a lime worked pretty well actually. Agreed, it was nowhere near the exotic flavors of a kaffir lime leaf but it was definitely worth than having nothing.

Thai Basil is definitely not a pantry staple for me, but strangely I had it on me. Maybe because I made a certain Thai Fish Curry earlier this week for a potluck! Thai Basil is so different from its Italian counterpart. Its has a spicy, anise-like flavor (almost like the spice, Star Anise) and is perfect for this soup. But I think some fresh cilantro would have worked well too. 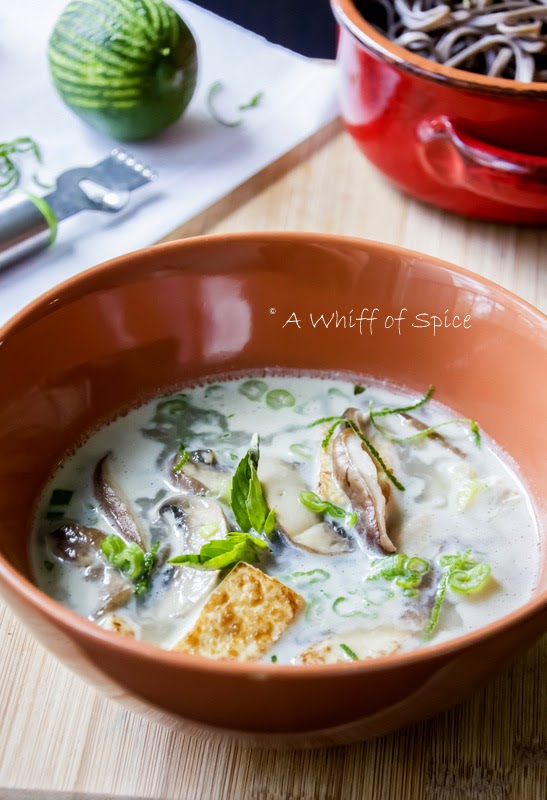 Currently, coconut milk is a raging fad in the US. Though it is high in saturated fat, it still boasts of a huge array of nutrients. Consumed in moderation, it is actually good for you. I do not have much recipes in my repertoire that require coconut milk and hence, use it sparingly. But it is amazingly delicious and a handy thing to have in your pantry. Just a touch of this vegan creaminess makes your ordinary meals fancy and gourmet. 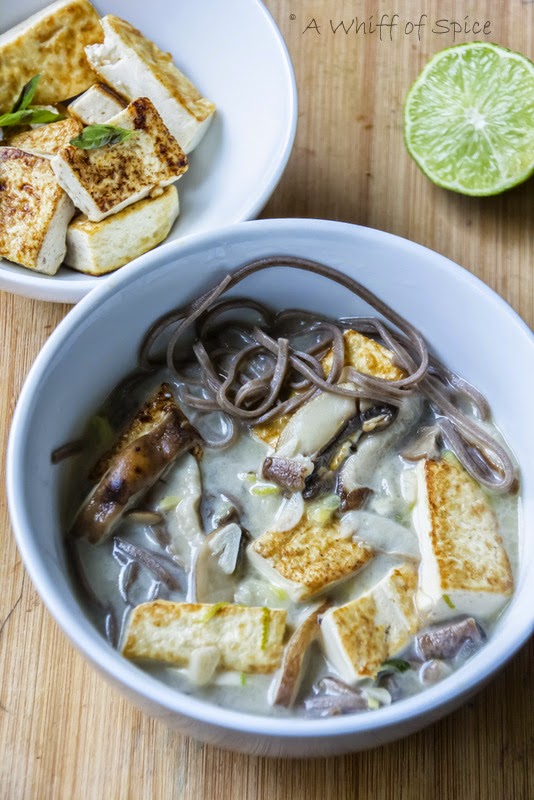 This soup is a perfect first course for a dinner. Its light and flavorful. To make it into a meal, just add a cup or two of your favorite boiled noodles. We love Buckwheat (Soba) noodles at our house. It had a very distinct nutty flavor and we use it a lot in stir-fries and noodle soups. The fact they have Glycemic Index, helps my cause too.

Here is a snapshot of the recipe.