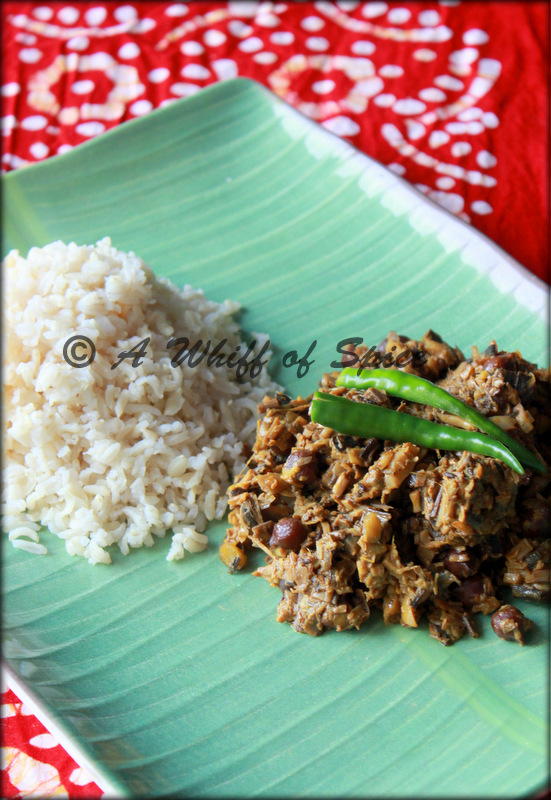 Ask me my favorite veggie preparation, and without batting an eyelid, I’ll say “Mochar Ghonto” (Banana Flower/ Banana Blossom curry. The ‘ch’ in ‘Mocha’ is pronounced as ‘chair’ and not as in ‘chorus’), followed very closely by E(n)chor er Dalna.


Banana Blossom or Mocha as it is called in Bengali is widely used in South East Asian cooking as well as in Bengali and South Indian cooking. My Malaysian friend once treated me to a banana blossom stew, which was simply out of this world. Will try to coax the recipe out of her. Back home, growing up, this Mochar Ghonto was a pretty regular feature in my home. But as we grew up and my mom got busy with her business, the frequency decreased, but still we would have it at least once a month. The main problem why most of neo-cooks like me, shudder at the thought of making Mochar Ghonto is because of the tedious prep work. 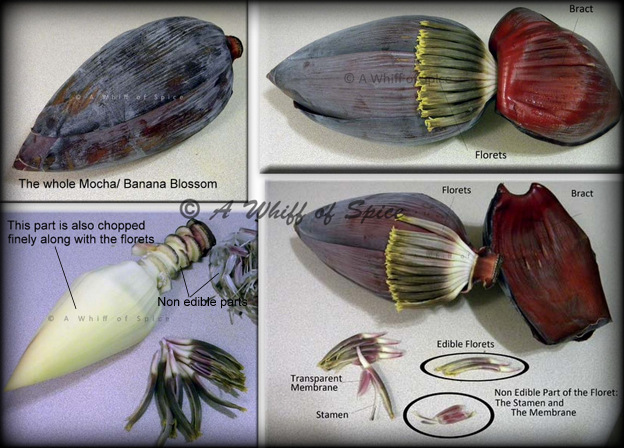 Firstly, Mocha or Banana Blossom is very rich in iron and exposing it to air while handling it, results in discoloration. Hence, it is advisable to rub your hands, knife and chop board with oil. Any oil will do, but since Mustard oil is the primary cooking oil for the Bengali, I have grown up seeing my mom use mustard oil and I follow the suite.
Remove each Bract (the reddish-purple fibrous skin) and collect the florets. Continue this procedure until you reach the pale-yellow 'heart'.
Each floret will have one center stamen and a transparent membrane. Remove both of these as they are not edible.
Bunch all the 'stamen-membrane removed' florets together and chop them finely. Finely chop the yellow 'heart' too.
Keep all the chopped up florets in a big bowl filled with water and mixed with turmeric and salt. The Turmeric will prevent the florets from discoloration and also remove some of the bitterness (if any).
You can see a nice video of how to clean and chop Mocha or Banana Blossom here.

The banana blossoms are slightly woodsy in nature and takes a long time to soften and became pliable. So after soaking it for 15-20 minutes, I boil it in salt and turmeric water. I pressure cooked mine, but you can boil it on stove top for 20 minutes. Drain and keep aside.

Mochar Ghonto is traditionally made with cubed or grated coconut and/ or boiled Red Chana (Indian Black Chickpea). Fried shrimps are also often added to satiate the fish loving Bengali palate. But today we are going the vegetarian way. Though Mochar Ghonto cannot be envisioned without coconut, I have kept it out of my recipe. Puritans would sneer at my Mochar Ghonto, made sans coconut and potato, but wait till they taste it and fall in love with my healthy takes on the gourmet classic.

As said earlier, Mocha florets are woodsy and taste like tree barks if not properly amalgamated with spices. Since that they long time to soften and 'give-in' to the mush like consistency, the amount of oil is usually on the higher side. However, I have an surprise ingredient, that will make the Ghonto deliciously mushy with only 2 table spoon of oil. 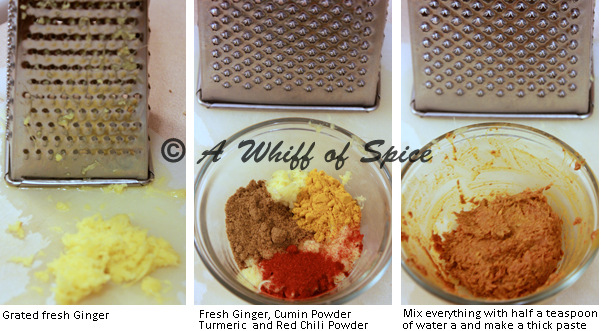 I have gown up seeing my Mom make freshly grounded paste on her Shil-nora. "Early morning, her kitchen help would sit on the kitchen floor with the shil-nora, a flat pock-marked square black slab of stone and on it would make pastes of all kinds of spices. As she moved the mortar on the flat piece, her bangles tinkled and made music with the jarring noise of the stones. Deftly she would sprinkle some water, gather the spices with her fingertips and roll the mortar until a smooth amalgamation of spices was born." - copied unabashedly from Bong Mom's Cookbook's Shaak Ghonto -- Green with Veggies post, since it very aptly and beautifully explained the workings of the Shil-nora! For this Ghonto, she would grind fresh Ginger and Cumin seeds together with one or two Green Chili and mix Turmeric and Red Chili powder to the paste. Since I do not have the luxury of neither the shil-nora nor the kitchen help, I grate about 2" piece of ginger and then add a teaspoon of cumin powder, half a teaspoon of turmeric and red chili powder and mix it with half a teaspoon of water to make a thick paste.

Then, I heat 2 tbsp of mustard oil in a khadhai/ wok/ pan and temper it with a teaspoon of cumin seeds and Tej patta (bay leaf).
Once the spluttering stops add the paste made of ginger, cumin powder, turmeric and red chili powder.
Fry till the masala is cooked through and the oil separates.

Before you cover the mocha, add salt to taste. In the second portion of the pic, you'll see even after 10 minutes of covered cooking the mocha is still separate and not particularly mushy. Now comes my twist!

I add half a cup of milk! Purist might scream blasphemy, but I have my logic. You see, mocha is mildly bitter and so it is commonly cooked together with coconut, which releases its milk and imparts a sweetness to the curry. I use low-fat milk to reduce the bitterness and the milk helps to moisten the cray and after 2-3 minutes, you'll find it made the vegetable mushy, the exact consistency we were looking for. If you fancy, a light coconut milk can also be used instead of plain milk.

Spice plays a very important part in this recipe. Usually, oil is tempered with bay leaf, cumin seeds, cardamom, cinnamon and cloves. But Mom use to temper the oil with just bay leaf and cumin seeds and just before finishing the gravy, she would add, freshly made Garam Masala paste and a dollop of Ghee. The aroma that these two together would let out, would draw us into the kitchen and we would try to eat to eat straight out of the hot khadai, much to her disgust. Back in my kitchen, I finish off the curry with a teaspoon of Garam Masala Powder and half a teaspoon of Ghee. Serve hot with steaming White Basmati Rice (or Brown Rice) and experience bliss!! 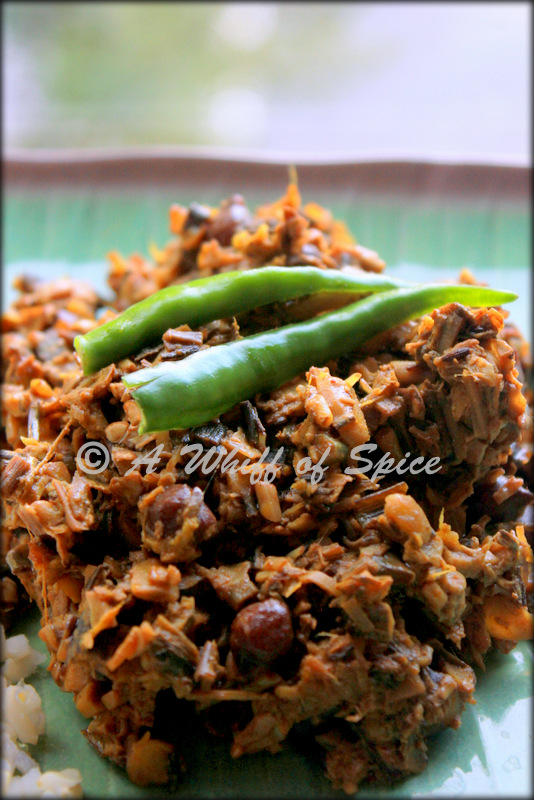 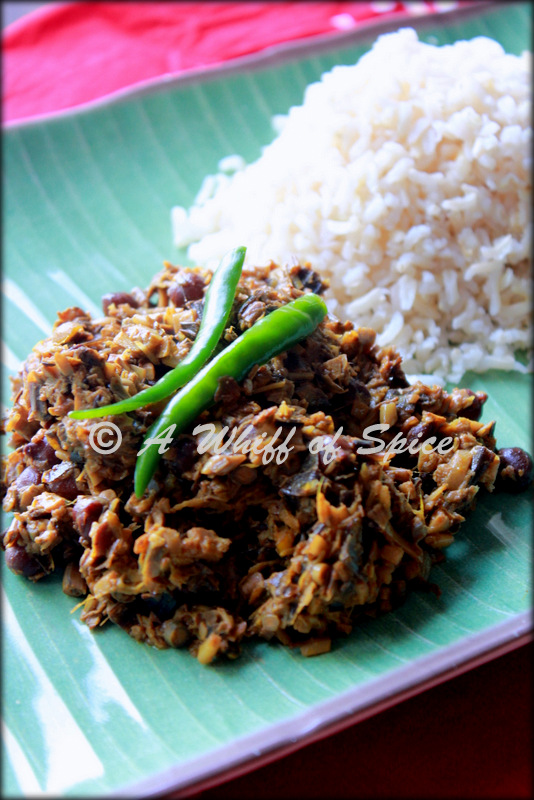