I had no intentions of blogging about this recipe and hence there are no step-by-step pics. But after having it, I was compelled to do so.


Now, for some Rapid Fire Questions:

Q: What do you do when you have 6 pieces of Tandoori Chicken Drumsticks leftover, from your son's Birthday Party?
A:  You stash  them in a Ziploc bag and throw them in the remotest corner of the freezer, well hidden behind tubs of ice creams.

Q: What do you do, when the Ziploc bag resurfaces after 10 days, because the ice cream tubs has vanished?
A: You stare hard at the bag in disbelief and then do a Google Search "How to use leftover Tandoori Chicken" and get broadly three options: a. Make Tandoori Chicken Sandwich; b. Make the yummiest Butter Chicken; c. Make a Tandoori Chicken Salad.


I chose Option B. Not by choice, by compulsion. My pantry had no bread. The last pieces were devoured with coffee for breakfast. And the only greens in my fridge were a few sprigs of Coriander Leaves and Parsley. And I also ran out of the quintessential ingredient for Butter Chicken - Butter!

All said and done, dinner had to be made and quickly. Sam would be in anytime.

So I took my Korai (Kadai/ Wok) and added exactly 2 tbsp of oil. (Yes! I measure my oil. I am diabetic and that's what my dietitian had suggested, which I religiously follow.)

While the oil heats up, I shred the tandoori chicken drumsticks in to bite sized pieces.

I added 2 cardamoms, 1 small stick of cinnamon, 4 cloves and 1 bay-leaf and let it sizzle a bit.

Then I added 1 finely chopped onions, 4 cloved of minces garlic and around 1 inch piece of ginger grated. I let it fry, covered fora minute or so, till the raw smell was gone.

Next I added salt, 1 tsp of chili powder, 1tsp of coriander powder and 2 heaped tbsp of Tomato Paste. I sprinkles some water to avoid scorching of the masala. I cooked the masala, till it was a gorgeously red thick paste.

Now I take it of the flame and gently mix in some beaten yogurt, around 1/2 cup or so.


Heat is back but gentle, I tip in the shredded tandoori chicken and a cup and a half of water.

I let the gravy come to a gentle boil and then simmer it for 3-4 minutes.

The Butter Chicken is near completion. To do some justice to its name, I added a teaspoon of "I can't believe it's not Butter" to the gravy. A teaspoon of Garam Masala and a generous pinch of Kasoori Methi dressed up the gravy. And then Sam knocked the door. Perfect timing I say. He peeped in the kitchen and the following conversation followed:

Sam: Smells good. Ki baniyecho? (What did you cook)
Me: Butter Chicken
Sam: Good. Sathe ki Porota banachho? (Are you making Parathas to go with it?)
I stared hard.
Sam: Ok. Roti will do.
I stared harder.
Sam: Tahole ki bhaat diye Butter Chicken khabo! (Do you expect me to have Butter Chicken with rice!)
Me: Change koro and haat mukh dhuye aasho (Change your clothes and freshen up)

Having Butter Chicken with Rice is not a crime, but Sam has few mental blocks. He can never have North Indian styles dishes with rice. Butter Chicken, Dal Makhni, Palak Paneer, Punjabi Chole has to be had with roti, Paratha or Naan.

So while Sam freshened up, I boiled some Whole Wheat Spaghetti and tossed it with my Butter Chicken, topped it with some chopped parsley and some grated Parmesan Cheese. 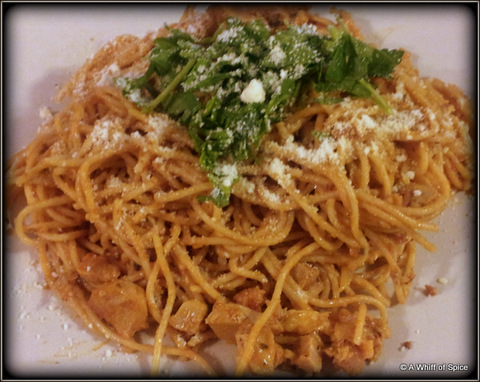 Sam was shocked to see his dinner plate and screamed, "Eta Ki!!" (What is this??)
"Puran Singh meets Mario Batali", I coolly replied.
"Well Done", Sam said as he polished off his platter.