Chicken Stroganoff - My lightened up version 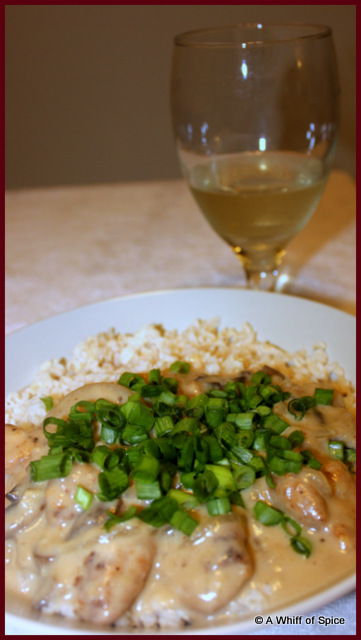 Coming back to the Beef Stroganoff, it remained one of my favorite dish to order and post marriage we had it at least once a month. With my increasing health issues, eating out became infrequent and the Stroganoff became a pleasant nostalgic memory. Of late, I again started craving for that rich gravy and the tender and almost melt-in-the-mouth beef. Its been nearly 3 yrs that I have given up eating beef, any red meat for that matter, so I tried to find a suitable Stroganoff recipe using chicken. Now a traditional Beef Stroganoff is a rich gravy of onion and mushrooms, white wine, beef stock, heavy cream and the beef is slow-cooked in that gravy, till its tender and melt-in-the-mouth. Finally its finished off with a huge dollop of sour cream and hand-full of fresh parsley. Ans its a whooping 410 calorie, a cup!

And then there  is my Chicken Stroganoff recipe, whose calorie count, I am not aware of. But definitely a lot lighter than its beefy counterpart. 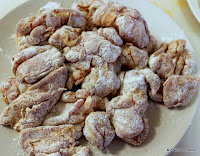 Lets start by prepping the chicken. Cut the boneless, skinless pieces of chicken into bite size pieces and season it with salt, pepper and paprika or Kashmiri chili powder. Coat each piece with all purpose flour liberally and then shake off the excess. Next slice the onions finely and the mushrooms slightly thickly. I used white button mushrooms. But you can use the brown Portobello mushrooms too. 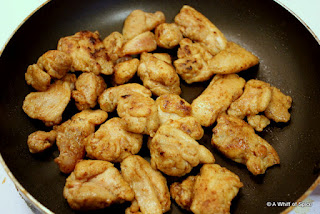 Next, heat 1 tbsp of oil in a non-stick skillet on medium heat and sear the chicken pieces until golden brown on both sides. It takes approximately 5 minutes per batch. 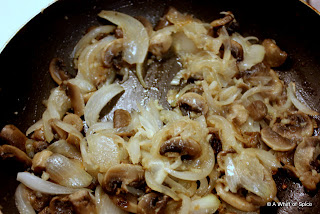 In the same pan, add the remaining oil and saute the garlic, onions and mushroom till soft. Around 3 minutes. 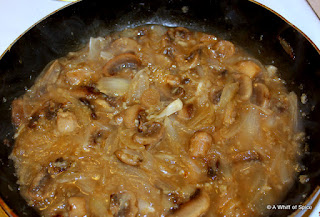 Now deglaze the pan with half a cup of white wine and half cup of chicken stock. I used Pinot Grigio. Add the Worcestershire sauce and the salt and pepper to taste and a healthy pinch of Nutmeg powder, and let it simmer for a minute. A traditional stroganoff recipe does not use any spices. The beef imparts is robust flavor. Since I'm using chicken, I added a pinch the nutmeg to liven it up a little. If you think otherwise, please avoid the nutmeg. 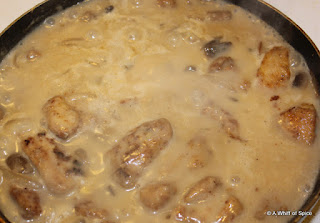 Tip in the browned pieces of chicken back to the gravy and let it simmer for sometime. The flour from the chicken will help to thicken the gravy. Now its time to add some heavy cream! So we take one-fourth cup of milk and add 2 tsp of whole wheat flour (atta) and mix well. Now add it to the gravy. If there are lumps in the milk-atta mix, strain the mix,before adding. In a a minute, you'll see the gravy thickens and gets a creamy consistency. 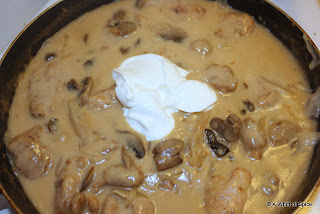 Finally, finish it off with a dollop of sour cream! I made my sour cream using 1/4 cup of thick Fat-Free Greek Yogurt and ½ tsp of all purpose flour. The flour prevents the curd from cuddling and gives the gravy its glossy sheen. 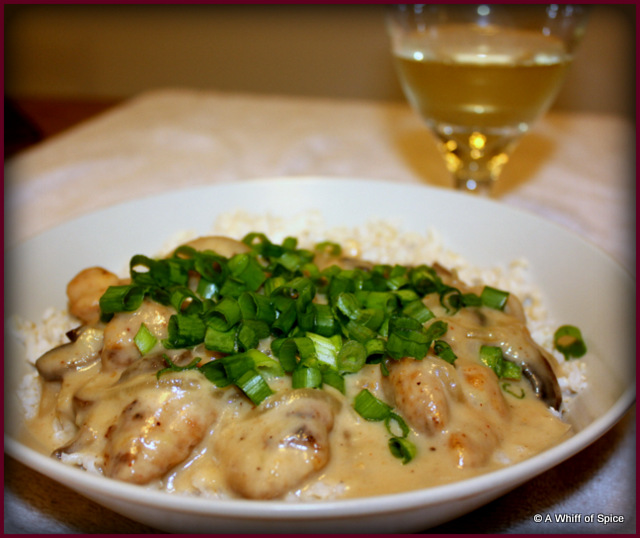 Chicken Stroganoff is usually searves on a bed of egg noodles and garnished with finely chopped parsley. But to give it even healthier twist, I served it over a bed of brown rice and garnished with scallions greens instead of parsley. And I wish I had chopped the scallion green little more finely.....