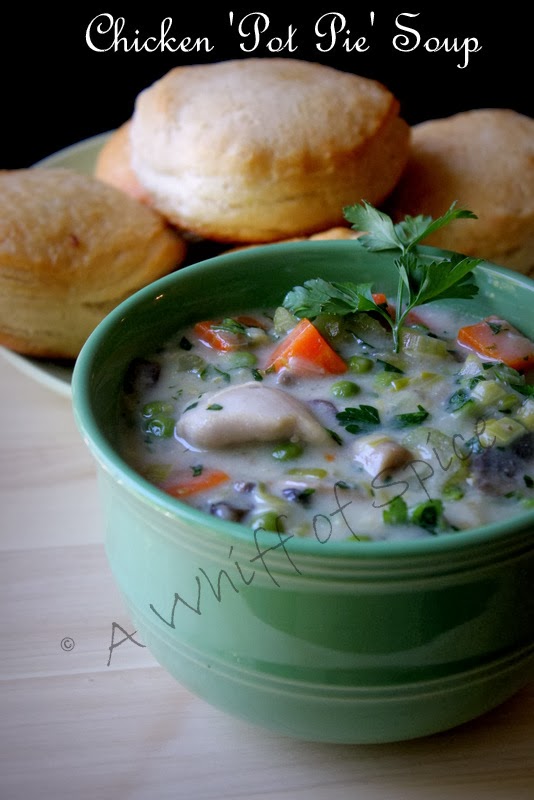 These past two days has been insane, weather wise. The United States experienced it coldest weather in decades this week.  Some areas in the United States dropped to their coldest temperatures in years as a polar vortex flooded the country from the Arctic, spreading into the Midwest and expanding to other states from coast to coast. 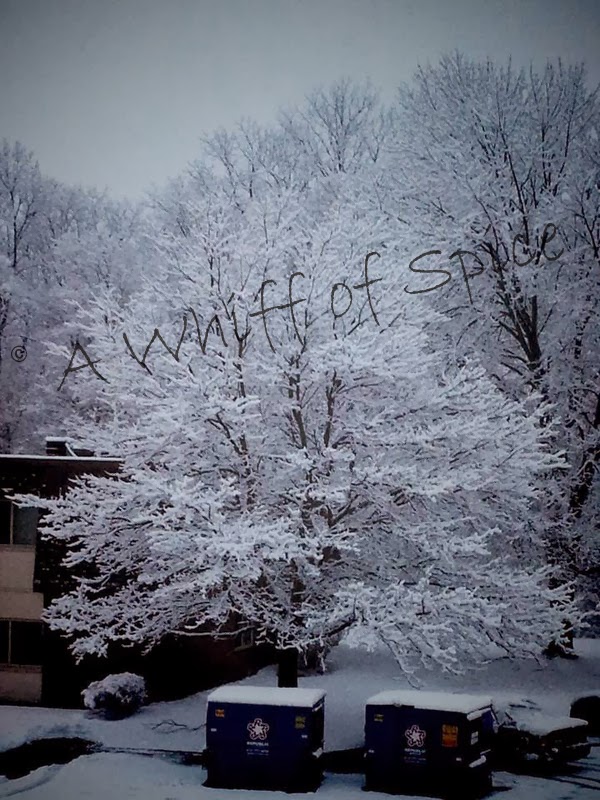 Cincinnati was spared the promised 8 inches of snow but the windchill was killing. From Monday morning to Tuesday evening the temperature ranged between -21F (-28C) to -28F (-33C). We definitely stayed in.

What amazed me was the shopping frenzy I noticed on Saturday evening when we were out for weekly groceries. Every store I went were crammed with people with overloaded carts, as if there would be no tomorrow. I looked a my own cart and wondered if I underestimated the fury of the Arctic cold rush. 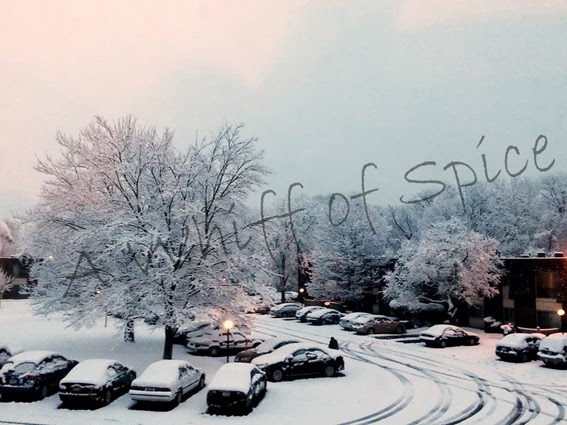 Little Sid's school was closed and it seemed like an extended weekend. Of late, our social life has been so busy, we hardly bonded as a family. The unexpected 'holiday' gave us the much needed family time. We slept in, watched movies and just lazed on the couch doing nothing. I did not cook much except for microwaveable popcorn and this huge batch of Chicken Pot Pie Soup, which we had over two days. 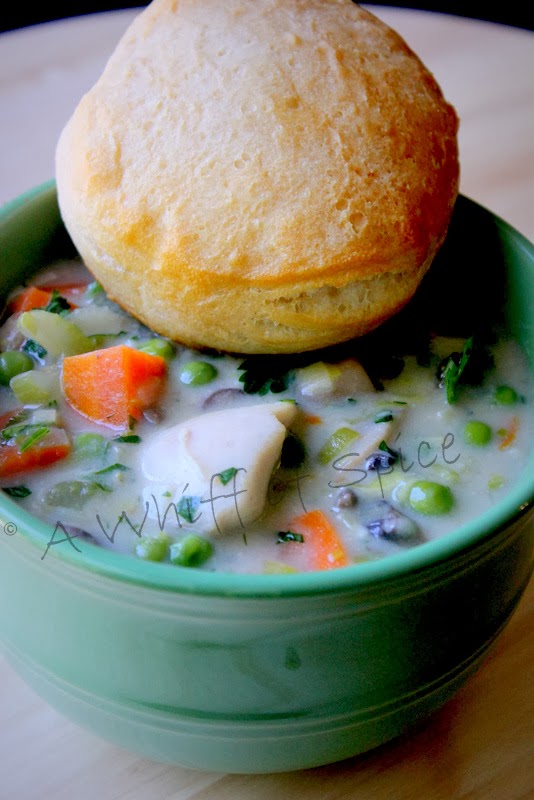 Chicken pot pie holds a special place in my heart. It was the first thing I tasted on US soil. Two and a half years ago, I had been miserable on our 15 hrs flight to Chicago. I cried a lot; watched three movies; drank at least 5 liters of water; went to the bathroom every 30 minutes and barely ate anything. By the time I reached Chicago, my hunger got the better of my sorrows and I headed straight to a restaurant as soon the immigration offices were done with us. And then I tasted the BEST Chicken Pot Pie in the world. Or it so seemed.

Making chicken pot pie at home is slightly tedious because all that puff pastry stuff that's involved. But honestly all I cared was the filling part. I had thrown away half of that puff pasty 'pie' crust any which ways. On whim one day,  I had Googled if anything called chicken pot pie soup existed. And it did.
All that creamy comforting goodness without the quick carb coating really did exist. And then it became a family regular specially on cold nights. 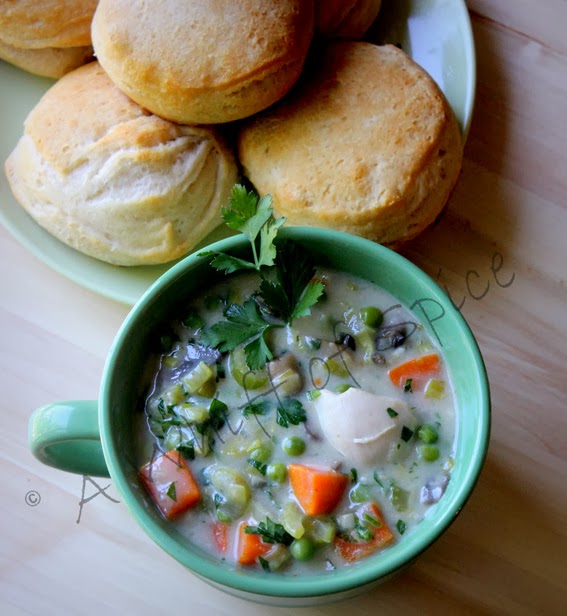 The best thing about this soup is that you can throw what ever veggies you have on hand and can get the same comforting taste every time. A bag of frozen mixed vegetables is also good. It also works well with canned chicken or leftover rotisserie chicken.  This weekend I got leeks from the market and used it instead of onions. Majority of the times I used onions because leeks is not a pantry staple. We had the soup with store bought buttermilk biscuits and the leftover with sliced whole wheat bread. 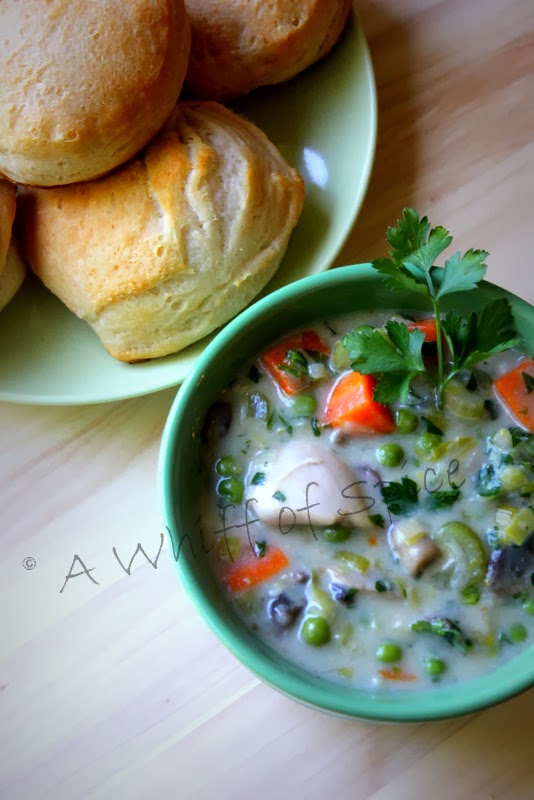