Peanut Butter Swirl Fudge Brownies - Valentines Day or not, these are a Must Try! 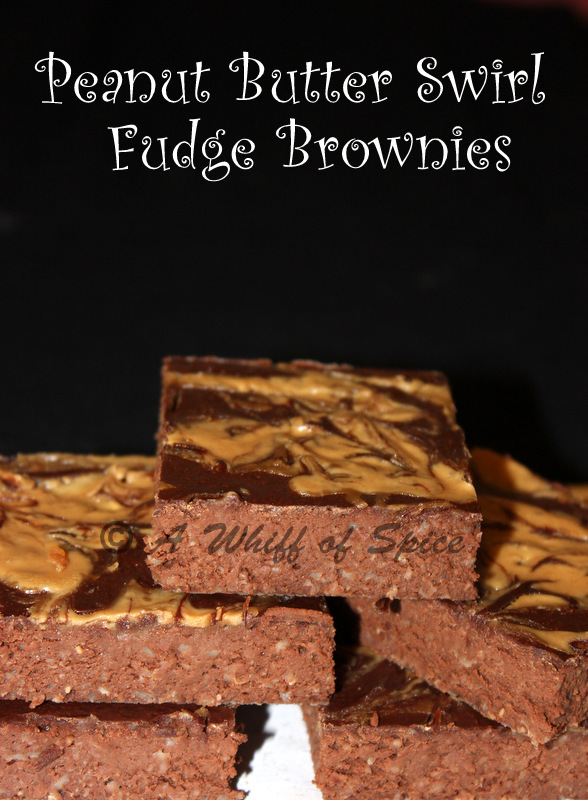 Let me be frank, Valentines Day never quite excited me. Valentines Day was unheard in India until the economy opened up and global products flooded the Indian markets. Along with Coke and Pepsi came Archies and Hallmark and India got introduced to "Valentines Day", "Mothers' Day", "Fathers' Day".


Every Valentines Day, through out my high school and college life, all my classmates would show off their loot and I would sit there sulking. I am not ashamed to admit, I used to JEALOUS... jealous of those cute n cuddly white teddy with red hearts and those Ferrero Rocher chocolates. And I vowed to remain unaffected by the frenzy called Valentines Day (the Sour Grapes syndrome). Things did not change even when I met Sam. This year we'll celebrate out Eighth Valentines Day together and I can very confidently say that we haven't spent a dime on flowers, cards or chocolate!

But this year I had to break my vow and buy V-day cards. Not one but twenty-four!
And I also had to by a new red shirt. Guess what! Little Sid will be attending his first V-Day party this Thursday in Red Shirt!
And I'll be also baking some yummy school-safe brownies for the group.

While still on Brownies, I was searching a school-safe brownie recipe, when I bumped into this wonderful recipe. A decadent Peanut Butter Fudge Brownie, without butter/ oil and flour! Now that seems too good to be true. Withing five minutes of discovering this recipe, I was in the kitchen, whipping my first batch of fudgy deliciousness. I was tad disappointed with the result. The brownies were deliciously fudgy but felt dry and grainy after few bites. But that was my problem and not the recipe's The original recipe used low-fat yogurt, while I used fat-free. That might be the reason and also my oats were not finely ground.


Few days later I whipped another batch; this time with few changes.
Firstly, I toasted the oats very lightly on my skillet, let it cool and then pulsed it on the food processor till it was fine powder.

Secondly, I used half of the peanut butter in the batter and the other half for swirling on top. This gives the required 'fat' to the Brownie batter and makes them moist.

Once the oats are finely powdered, dump all the ingredients in the processor and give it a good pulse. Everything should be well blended. Use only ¼ cup of the peanut butter for the batter. Either line an 8x8 pan with parchment paper or spay it with nonstick cooking spray and dust it with flour. Pour batter into prepared 8x8 pan. The batter will be thin, don't panic.

Microwave the remaining ¼ cup of peanut butter for about 15-20 seconds or till soft.Drop the melted peanut butter by spoonfuls onto the batter, swirling gently with a knife or a wooden skewer to create a marbled effect. Be gentle and do not over mix it. 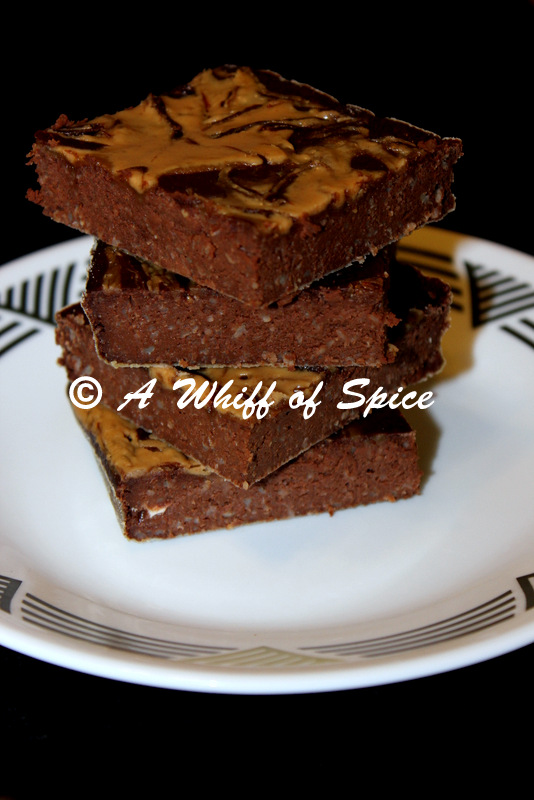 I had also added a handful of walnuts to the food processor (see those tiny pieces in the pic), because I like walnuts and they are kinda pairs well with both brownies and oatmeal. But, I forgot that these brownies had peanut butter. The flavor of the walnut did not come across very well and I'll not add them to my next batch.

This brownies are so fudgy and rich, that you'll not believe that they are actually healthy. You can even have them for breakfast.

Peanut Butter Swirl Fudge Brownies for breakfast on the V-day! Hmmm... That would be something to remember!