History has it that kitchen bloopers often gives way to new and improved dishes. A half baked cake became, what we know today as the gooey-ooey Lava Cake. And when the Archbishop was to visit a Convent of Santa Rosa in Puebla, the nuns panicked and ransacked their pantry and added everything from spices to stale bread and even chocolate to the sauce and served it over roasted turkey. Thus creating the national dish of Mexico; the famous Mole Sauce!

Now my dear friend the Cocowind had a similar blooper and became the inspiration for this post. She pureed some cilantro, mint leaves, green chilies. salt and sugar for her "Green Chutney" and was too lazy to wash up. She used the same blender to make some onion paste for her Punjabi Chole (Chickpea/ Garbanzo bean curry) recipe. She called me up after dinner saying she just had the "most awesomest" (pardon! Wren & Martin!!) with a subtle hint of mint. 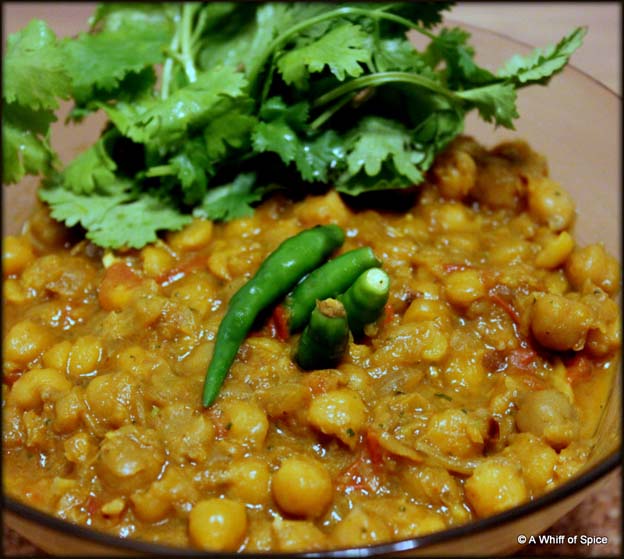 Fast forward two weeks... I am making my green marinade for my Lamb Chops for our cookout party. Put a big bunch of cilantro, a handful of fresh mint leaves, 2 cloves of garlic, 4 green chilies, a teaspoon of coarse salt and a cup of fat-free Greek Yogurt in a blender and puree to a smooth paste. The marinade is done.   And as usual, my proportion went for a toss and I was left with a little less than half cup of excess marinade. I poured the extra marinade in a small zip lock; labeled it, with date and tucked it neatly in the freezer, behind the bag of frozen broccoli and forgot all about it.

A zillion years later... actually six days later I re-discovered it and as luck would have had it, I had my big bowlful of plumped up Chole ready from the overnight soaking. I prepared it just the way we prepare our usual Punjabi Chole, with lots of onion, garlic, ginger and tomato. I just added a teaspoon of my marinade to the masala and it just took the dish to a whole new level. So unusual... so Summer-ey.... so wonderful. And you need not prepare the chutney fresh every time. A store brought Green Chutney or a Mint Chutney would do the trick as well. Here how I did it. 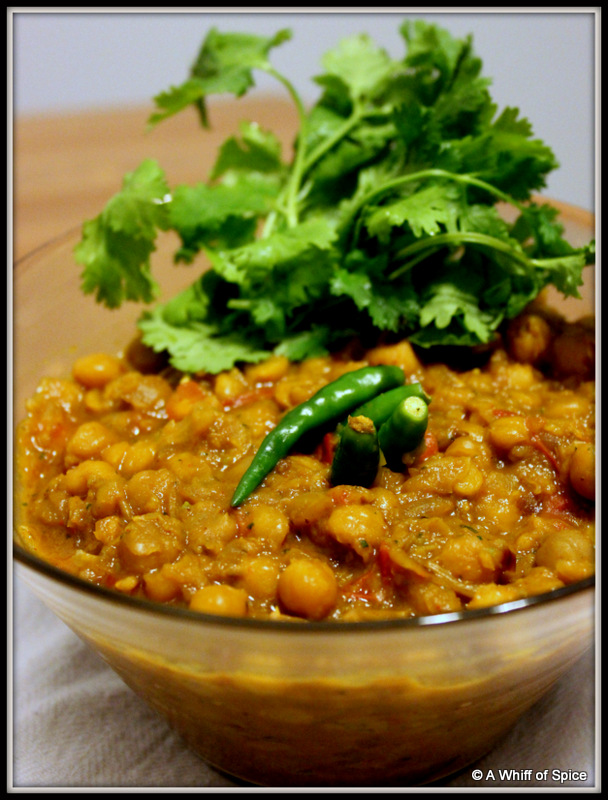 This recipe is low on spices and huge on flavor. Just what you want in your summer months. This fabulous curry pairs well with any Indian bread like the roti, parathas, naan or kulchas. Its an awesome combination with big round Bhature. It goes equally well with rice or even Aloo Tikkis. But if you are a Carb-conscious Diabetic like me, consider eating a big bowl just by itself or with a light salad on the side. Yumm!