During my growing up days, winters were synonymous with Circus Shows, Picnics, a mandatory visit to the Zoo, preferable on Christmas. For my son, all the above spells SUMMER! And he is enjoying every bit of it, including his daily doze of the pool.

This Summer got me loads of fresh vegetables from my Farmers Market. And the best form to eat them was lightly sauteing them in olive oil with a dash of garlic and a sprinkle of salt and pepper. Fresh, crunchy and flavorful - Health Bhi, Taste Bhi....

But being the quintessential Indian, I got bored with the stir-fries and wanted someting spicy and with gravy to go  with my store bought Pita Bread. A beautiful head of cauliflower was sitting prettily on my crisper drawer and I was dying to make the Baked Whole Cauliflower, ever-since my Ma told that she made it for my cousins a week ago. 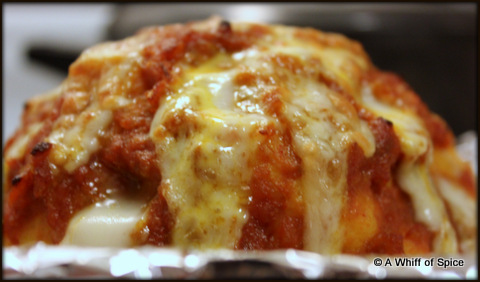 Baked Whole Cauliflower is one of my Ma's signature dish and she made it often for the in-numerous house parties that my Dad used to throw. This dish looks fancy but is incredibly easy to make. You cook the cauliflower in boiling water till soft but firm. Then make a thick gravy. The gravy can be as light or as rich as you might prefer. Coat the cauliflower in the gravy and bake it in a hot oven till the gravy bronze up and clings to the cauliflower. Grate some cheese over it and broil for a minute and done. Here goes my Step-by-Step process followed by the Snapshot. 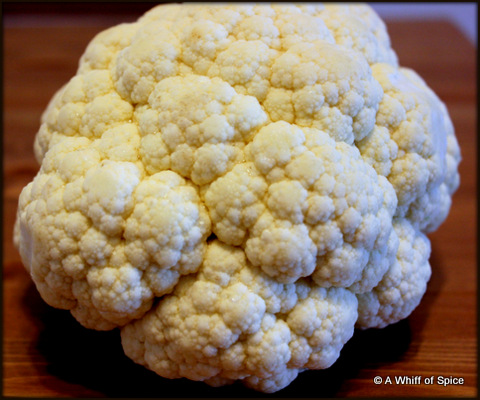 First take a beautiful had of cauliflower and take out all the stems and leaves. then wash it well under running water, taking care to reach and clean the innermost florets. 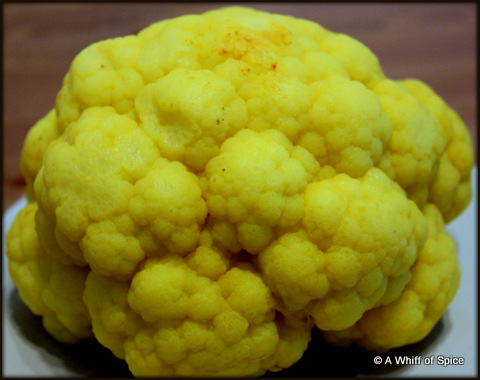 Now in a pot, big enough to hold the whole cauliflower, bring the water to a boil and add ½ tsp of Turmeric Powder and some salt. Add the cauliflower and cook till tender yet firm. 10 minute approximately. Drain and let it cool. 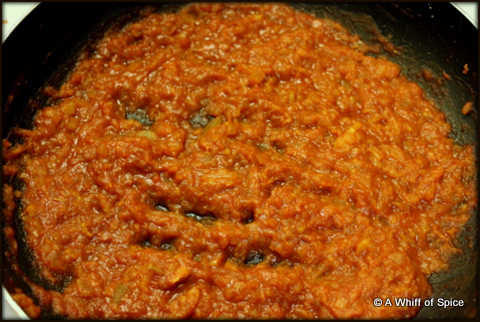 Lets make the gravy now. In a frying pan or skillet, heat 2 tbsp of canola/vegetable oil and add onion paste, ginger paste and garlic paste. Fry till its well cooked and oil separates. Add 2 heaped tablespoon of tomato paste, little turmeric and little red chili powder. Sprinkle little water, so that the masala doesn't burn and the tomato paste get well incorporated in the masala. Finally add some Garam masala powder to dress it up. This should be a smooth and thick gravy, so that it can coat the cauliflower well. Mine was tomato based gravy, but you can add cashew paste/ poppy seed paste, heavy cream and even coconut milk to give extra and unique flavor to the gravy. 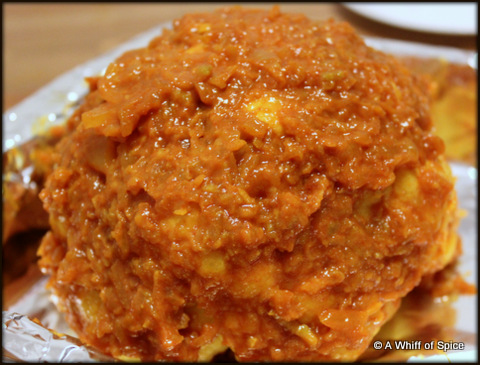 Smear the gravy on the cauliflower. Coat it well on the inside covering even the inner most floret. Else the plate will look pretty but when you cut the cauliflower open, it'll be boring yellow and taste band. This is the most important and crucial step.It now goes in to a 400F oven for 10-15 minute, or till the masala bronzes up. 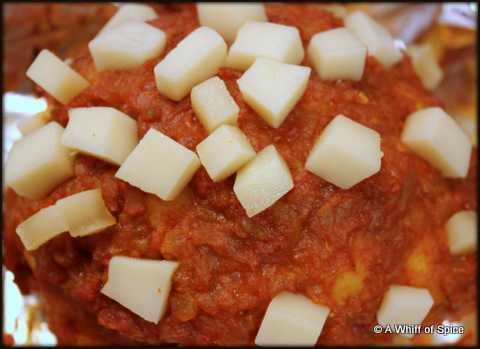 My lazy self would have completed the dish in the last step itself, but Ma always add a little cheese. "Dekhte sundor laage" (Its looks really pretty!) was her argument. Since I'm doing it her style, I better follow her. Ma would have patiently grated a cold cube of Amul Cheese and spread it evenly. The lazy me just chopped little cubes of Fontina Cheese and studded oven the bronzed cauliflower head. It goes back to the oven, in broiler mode now, for a minute to melt the cheese. 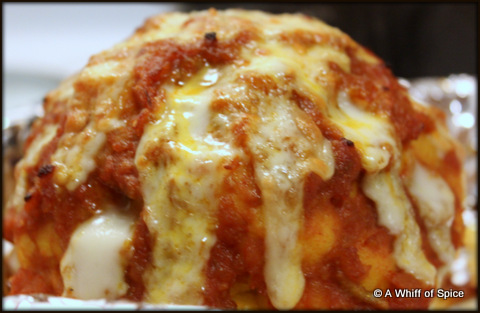 And Done!!! Looks fabulous and tastes equally good. Goes well with naan/ roti or pita bread, as is my case today! You can also try with a light Pulao like Peas or Vegetable Pulao. 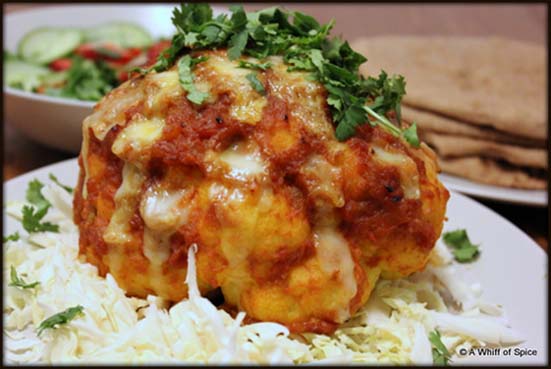