I was contemplating making Bong Mom’s Dhonepata Maach for a long time now. Finally, I could get hold of nearly all the ingredients. Instead of using 1 cup of coriander leaves, as the recipe called for, I used a bunch and doubled rest of the ingredients and added a few personal touches. Resultant, I had a nearly a cup of leftover masala.

Being the resourceful person that I am, I marinated few cute drumettes that were sitting on my freezer for some time now, in the leftover masala and baked them on a 350F oven for 50 mins and wow! Verde El Pollo is born!

But why the strange name? Well, Sam fell in love with the Spanish language during his 4 month stint in the Mexican town of Juárez. And his favorite way of showing off his Spanish skills is by suddenly switching to Español in between conversations, especially arguments, much to my irritation. So I thought of getting back at him by giving my accidental innovation a Spanish name. 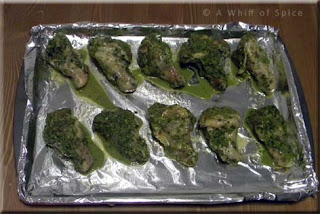 
Chicken drumettes – 1 pound (approx. 10 pieces)
(Drumettes is the small fleshy part of a chicken wing, that resembles a drumstick. Its somewhere between a drumstick and lollypop)

Grind all the ingredients listed under ‘Marinade’ to a thick paste.

Coat the chicken drumettes with the marinade and refrigerate for 3 to 4 hrs.

Place the chicken drumsticks on a foil-lined baking sheet. Bake until the skin is crisp and caramelized, about 50 to 55 minutes. I broiled the last 5 mins of cooking time.

Squeeze some lemon juice and sprinkle some rock salt on the grilled drumettes. (Optional step) 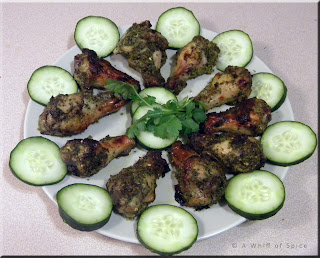 Note: This dish does not use any oil. I kept the skin on the drumettes, so that it can have a crispy layer and also the oil present in the skin, keeps the chicken moist during the cooking process. You can do away with it. In that case add a tablespoon of oil in the marinade.


And oh! The  Dhonepata Maach was yumm! I did not fancy “Shaan’s Fish Seasoning” very much. Next time, will use  Bong Mom’s spice mix of Kasoori Methi, Garam Masala, Coriander powder and Aamchur, instead. And Yes! there will be next time.